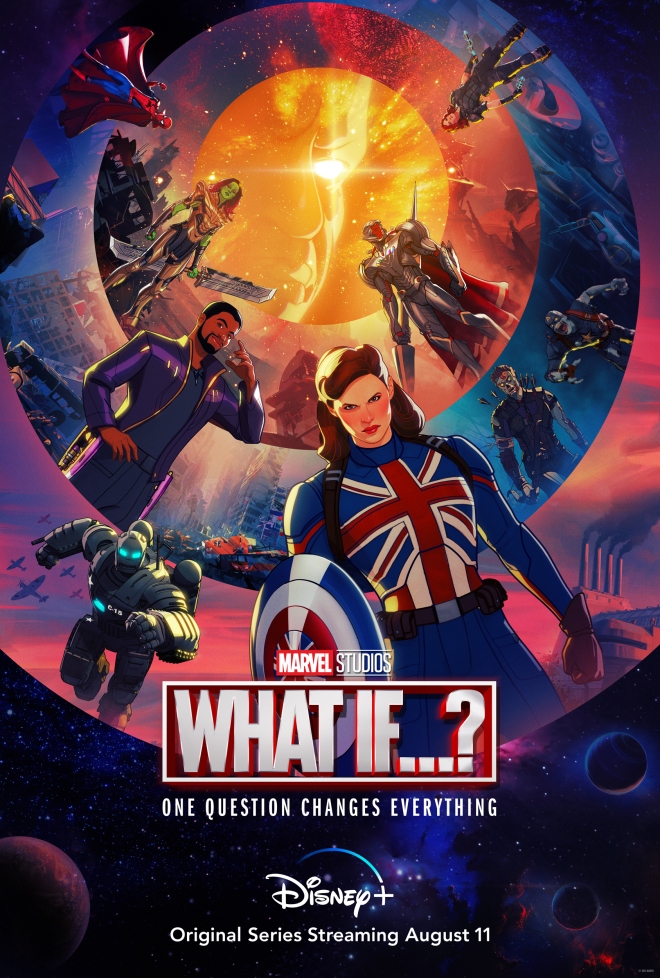 “As for me, these are my stories. I observe all that transpires here, but I do not, cannot, will not interfere for I am the watcher.”

Jeffrey Wright, What if…?

WARNING: This review will contain spoilers for Loki, Endgame and a few other MCU movies. Read at your own risk.

Following the introduction of the Multiverse in Loki, What if begs the question, if one little thing is changed, what repercussions will the universe face? The show answers questions such as what if Peggy Carter became Captain Carter instead of Steve Rogers becoming Captain America or what if T’Challa was Starlord. The questions are each answered by a short episode all culminating in a series finale that will have you on the edge of your seat.

I love a good anthology series as much as the next person and this show did not disappoint. The inclusion of different characters being the center of a story that was originally not their own is phenomenal and even though an episode was cut which makes the finale a touch difficult to understand, the story perfectly finds a way to tie everything together. I adored the animations and the inclusion of stunning shots that the MCU is known for. Overall, the show was so extremely enjoyable because not only did it include the shock factor, it included a well thought out explanation of how each change impacts each universe.

In terms of acting standouts, there weren’t many in this show. In fact, there really was only one. Jeffrey Wright as the Watcher was a perfect addition to the team. His voice was extremely soothing and you could hear the emotions that he was trying to convey and it added to the story in that it didn’t feel like narration. Instead, it felt like someone was genuinely telling us his story and his jobs. He reminds me of those people who genuinely enjoy their jobs and are proud and passionate to share with people. Since the Multiverse is relatively new to the MCU, the show makes it seem like the Watcher has just gotten this amazing job that he can’t wait to share with the world. It’s a very entertaining angle on the narrator and I like that the show starts off by trying to convince the audience that they can trust the narrator, (SPOILER) only to have the Watcher break his vow in order to stop the entire Multiverse from being destroyed by Ultron.

I do have to say, I feel rather overwhelmed by the amount of Marvel content that has come out this year. While this has been an amazing year for all kinds of filmmakers and history has been made on both the big and small screen, I feel as though Marvel has dominated the entire year. Too many movies came out this year that were related to Marvel and while most of them were wildly entertaining, this was honestly one of the shows I could have done without. I understand that it’s meant to be a fun show that, of course, I don’t have to watch but when other movies that have come out since refer to this show, it’s hard not to want to be caught up. I feel as though while Marvel has increased their quality in shows, I found no real point to this show other than to cater to fans of the comics. There was no real story to this show. Instead, it was a fun experiment.

All of this is not to say that Marvel shouldn’t continue to experiment because some of their later experiments worked rather well, however, the scope of this show has the potential to be extravagant in the best way possible. Changing one small variable is the scientific way to do this show and the first season played it extremely safe but I want the second season to shock the audience in every single way imaginable. I want to curse at the credits because I have to know more about this alternate world. Marvel knows how to do that and so I wonder what made them forget their talent here? I appreciate this show; I enjoyed it but it’s not top tier content and by this point I wasn’t truly enjoying Marvel anymore. I was just consuming it to be knowledgeable and just in comparison to all other media that was released this year, I could easily say that I was the least enamored by this one.

Overall, this is a show that is fun but there’s not much more to say past that. This was the point that Marvel seemed to lose some of its audience because they stopped being risk-takers with their shows. Phase 4 seemed to be promising something extraordinary with WandaVision and Loki but forgot that promise. I will give the actors, cinematography and CGI team more credit than the plot in making this show fun, but unless this show embraces its potential to be wild, I don’t see this craft elevating Marvel’s storytelling reputation anytime soon.