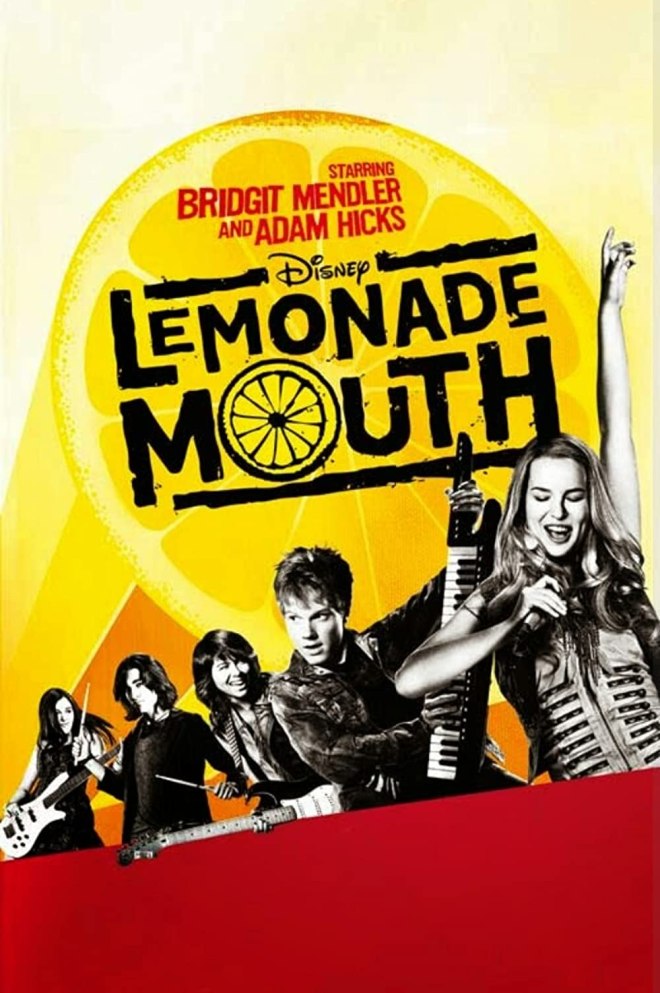 Be Heard. Be Strong. Be Proud.

Lemonade Mouth is a DCOM that aired in 2011. The premise of the movie is five students who meet in detention in a Breakfast Club-esque way and realize that they have wonderful chemistry, not only as friends but as a band. As the band navigates the hardships of growing up and the oppressed manner in which the band acts, the audience is given a movie about a wonderfully lovable group of underdogs who navigate their high school experience through song.

I’ve extremely hyped up this movie in a way that I would a movie with a much higher budget. This is a low budget movie and it’s clear. Much of the advertising that the movie got was on Disney Channel and while that meant it had a large audience, it also meant that we weren’t given the opportunity to see this movie flourish. At its heart, this movie is about friendship and that is very explicitly spelled out to us in song but even implicitly, this movie makes it clear that without the chemistry between the four lead actors, this movie would not exist.

The acting is Disney Channel level, I won’t deny it. But, this group of actors know how to read a scene they are in. When the tone is serious, the audience feels it but when it’s comical, the audience knows they are allowed to laugh even though the topic is so serious. The movie is essentially about the fact that the school prioritizes sports over any creative endeavors. More implicitly, this movie is a satire about the government’s obvious favoritism of certain groups and the need for those groups to bring substantially more to the table in order for them to receive the same treatment as the prioritized groups.

The plot and character development is what really sells this movie. The plot takes time, even with a short run time, to allow the audience to truly know what the characters are feeling and gives them a personality outside of being in a band. We are allowed to know that Olivia is anxious and that Charlie feels inferior to his older brother and that only enhances the story. While some of the plot lines feel like they are just thrown in there just to not completely be redeemed, the majority of the movie properly ties up all loose ends while maintaining its commentary. At the end, the band makes it big and it feels right that they do because their start is so believable.

The reason that I find this movie relevant even a decade later is that this movie’s message will always be relevant. There will always be a high power taking power from the voiceless. This movie emphasizes a point that I’ve always found important and that is the power of using one’s voice. Not only are we given a group of people determined to overthrow this regime and bring a voice to their fellow students, we see the internal and external obstacles that they face. They face obstacles that feel believable to its audience and allow the targeted audience to feel heard. Another important thing to note is that they attach a symbol that can reference the fact that friendship and creative expression is as necessary as consuming nutrients. The act of coming together over communion is prominent in the sense that their shared taste and shared experience of being in detention has led to something more.

The movie also brings forward the idea that there, for the oppressed, there is no where to go but up and even if it doesn’t happen as fast as it does in this made-for-TV movie, this movie still has a message to share with everyone and that is ultimately what makes it stand apart from the other DCOMs whose messages feel outdated and less than poignant.  DCOM musicals are usually tacky with catchy songs. It’s just a fact. Nobody really watches a DCOM for the quality of the music; people watch it for the nostalgia factor. The songs in this movie are not only catchy, they are actually quite good. They are upbeat and only further the message that it only takes a few people to raise their voices for someone to hear them. In the wake of all the oppression in this country, it’s a rare movie that can address that while still being thoroughly entertaining for all ages.