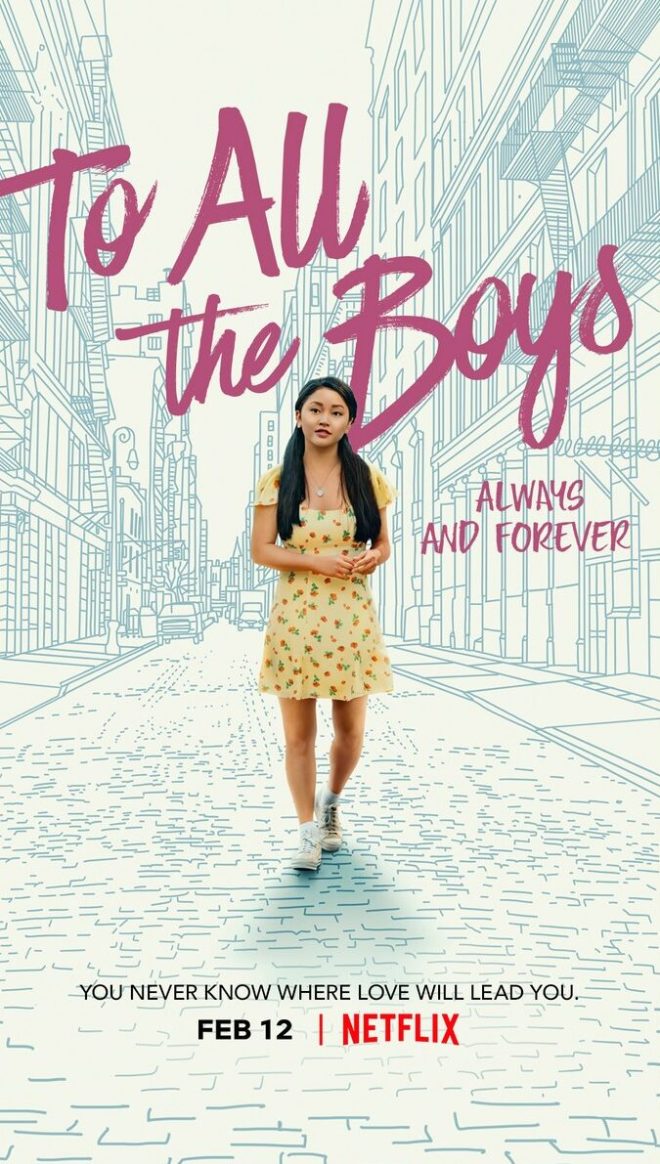 To All the Boys: Always and Forever

A meet cute is when a couple meets for the first time. It’s always cute, and that is how you know they’re gonna end up together.

Lana Condor, To All the Boys: Always and Forever

To All the Boys: Always and Forever follows Peter and Lara Jean as they navigate the impending threat of college. Lara Jean returns from her trip to South Korea and discusses the beginning of her relationship with Peter. As they try to unravel their first meeting, Lara Jean begins to apply for colleges. After a trip to New York City, Lara Jean suddenly finds herself questioning whether she wants to stay in California and be near Peter who has his heart set on attending Stanford. As the two try and work through what long distance will mean, Lara Jean sets out to find her own identity outside of her relationship with Peter.

It’s no secret that I’m not a huge fan of this trilogy. I think that while this movie is groundbreaking for the Asian American community (and that should be celebrated), it’s the biggest cop out that exists for a groundbreaking trilogy. Lara Jean is not a three dimensional character; she’s portrayed as only having her relationship with Peter and being the girl that can’t drive (like seriously I don’t need a THIRD reminder that Lara Jean can’t drive). She could’ve been developed so much more than having a typical high school romance.

I find Peter’s character as downgraded much in this movie. The characterization throughout the trilogy was solid for the first two movies and then let go of the characterization in this final movie. He seems wildly insecure, something that was only barely touched on in the second movie and suddenly seems to be his driving force in a situation that could’ve been resolved with a conversation. Some of his actions feel like the writers needed to add a level of toxicity that wasn’t initially written into the character. The appeal of Peter Kavinsky is that he’s a nice boy next door. This isn’t a bad boy story and the writers tried too hard to make it seem like Peter’s dreams are less than Lara Jean’s.

The movie itself suffers from its lack of plot. There are too many scenes that could’ve been cut. The movie itself could’ve been condensed into about a half an hour and then that would’ve been a much more solid ending to a trilogy that had promise but was ultimately failed by writers who didn’t care too much about making characters that the audience would truly connect to. This movie holds its own when it comes to adorable moments that make audiences squeal with delight but it doesn’t hold when it comes to quality. I found that this is another movie that I would need to constantly rewatch in order to truly feel like I watched the entire movie.

Overall, this movie holds its own as a cute teenage romantic comedy. Lara Jean and Peter are extremely wholesome and this movie does a great job with representation. I recommend this movie for people who are looking for a feel good movie but don’t necessarily care about the quality of the movie.