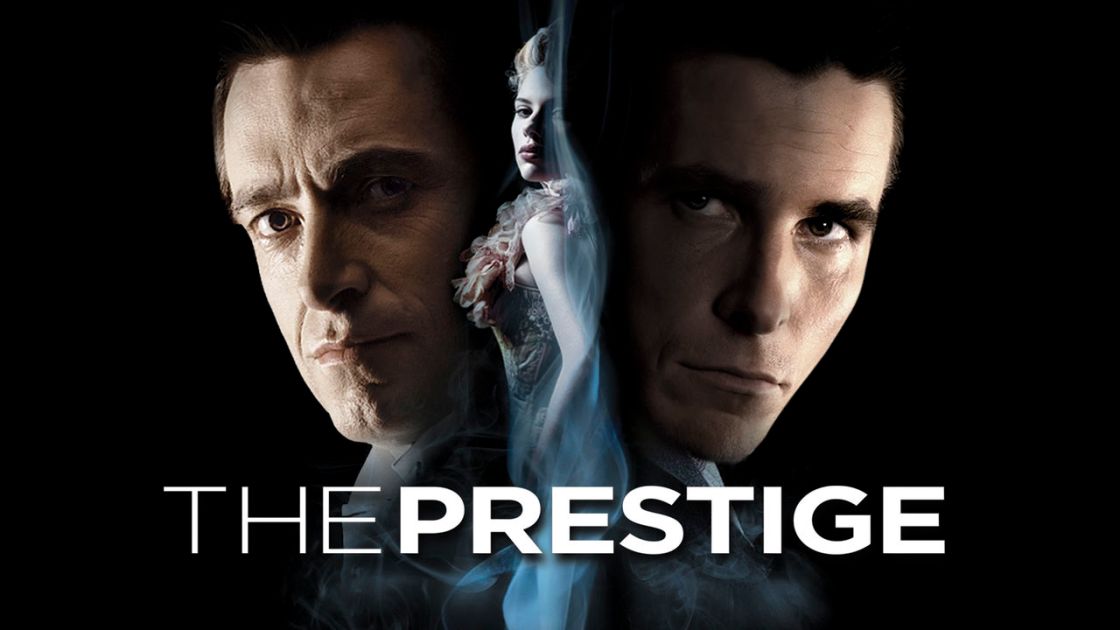 Are you watching closely?

The Prestige follows the story of two magicians: Alfred Borden and Robert Angier. They initially start out as friends, working together under a magician. After a tragic accident takes place, the two men become rivals. Each begins a campaign to undermine the other. One day, Borden performs the ultimate trick: transportation. Angier begins an adventure to search for the secret to Borden’s trick and starts to experiment with science in order to create a more authentic version of this trick. But, as Borden begins to investigate the trick, he is thrust into a plot that will result in one thing: his death.

This movie is Christopher Nolan’s masterpiece. Inception and The Dark Knight are phenomenal films but this movie has subtle nuances that make it an incredible film. As with any of Nolan’s films, the themes are this movie’s saving grace. Much of the movie revolves around the concept of revenge and envy. Angier consistently envies Borden’s natural ability when it comes to magic. This theme of envy is properly done by the tension betweenChristian Bale and Hugh Jackman. The two men do a great job of creating tension even when they aren’t on screen together. This was most noticeable to me by how they would refer to each other. I almost thought that the animosity was most stark in the way that Angier said “Borden” as though it were the most filthy word in the world. This nuance connects the themes of revenge and envy by demonstrating that envy and anger fueled revenge in Angier. In Borden, his envy always felt retaliatory; it was as though his hatred for Angier only came when he was being undermined and eventually arrested on Angier’s behalf.

Another theme that is really predominant throughout the movie was the concept of living a half-life versus living a full life (this paragraph contains spoilers so read at your own risk). With Borden’s twin being revealed at the end, the rewatch of this movie causes the viewer to focus on how obvious the twin was. In truth, it’s quite obvious, which might be the one criticism that I have with this movie. I think that using a body double or another actor with an less obviously made up face would’ve made the fact that Bale was playing both Fallon and Borden more of a shock at the end. But, the concept is actually really interesting. The idea that two men were living one life and therefore making sacrifices on the behalf of the other. It raises questions about whose idea it was and if the self-sacrifices were worth it. The goal here was always success but if Borden was never successful, what was the point of giving up true love? The message here almost feels really simple: a life without love is not worth living. It’s simple, but it’s extremely natural to include here.

The movie is also beautiful. The cinematography is dark and brooding, effectively matching the themes. The movie only seems to lighten up when the main characters are with their lovers or people they truly care about. Whenever Borden and Angier are together, the film goes dark, symbolizing the tension between the two of them. Scarlett Johanssan’s character is meant to be the one bright spot in the movie and there’s a brilliant scene where the audience can see that Angier has stolen her brightness (innocence) as he has lost his own. This whole part contributes to another theme about the negative impacts of ambition. Borden wants to be seen and in order to do that, he recollects some of his innocence; Angier wants to be authentic and that involved him losing his innocence. Angier is successful because he loses his innocence, but Borden can’t be seen because he can’t collect what he lost. This is why his wife is ultimately struck by tragedy. This theme is demonstrated in the technical aspects of the film, not so much the nuances and it’s still extremely strong.

Overall, this is probably my favorite Christopher Nolan film. It’s absolutely stunning and the storyline is wildly entertaining. It’s a film that makes you think (as all his films do) and makes you question your goals. Are your goals worth achieving if it means you lose everyone to do so? Is revenge a real motivator for ambition? I recommend this movie for people who like Inception and want a movie that makes you consider life from different angles.