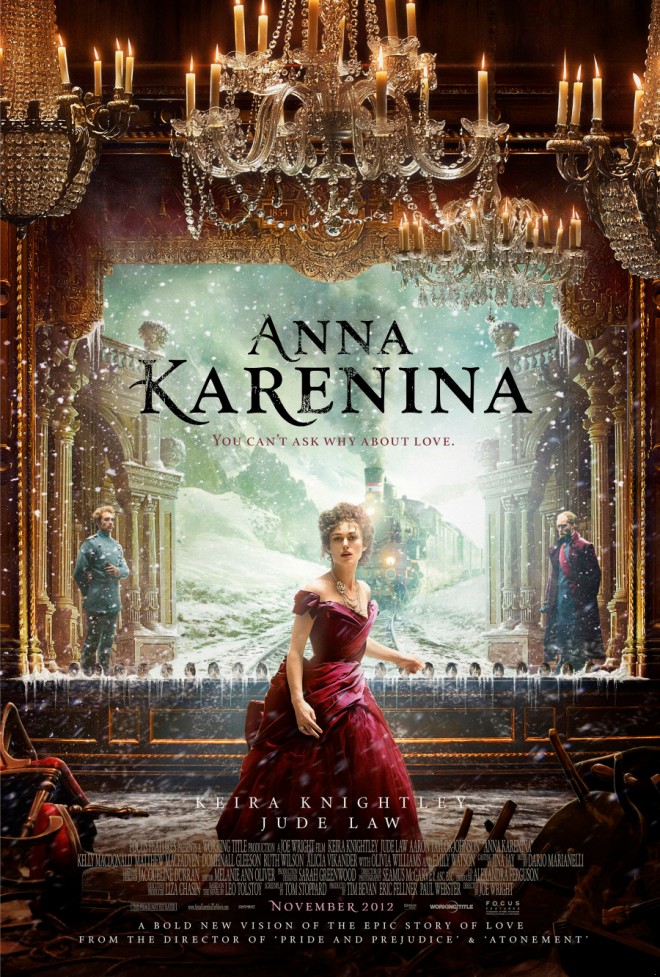 There can be no peace for us, only misery, and the greatest happiness.

Based on the novel by Leo Tolstoy, Anna Karenina is the story of a married woman who starts an affair with a young man named Vronsky. As their affair becomes more serious, Anna is forced to decide between her husband (a prominent member in Russian society) and the man that she deems the love of her life. The story follows the intricacies of Russian society and explores the role of women in a society that is dominated by men. Anna Karenina is a timeless tale with an all star cast of Kiera Knightley, Jude Law, Ruth Wilson, and Aaron Taylor-Johnson.

A large part of this movie is centered around the concept of music and theater. Each character’s movement is choreographed in a rhythmic way so that it almost seems as if the characters are dancing along to the story. I noticed that many of the movements throughout the movie were fluid and so that harsher scenes (such as Karenin yelling at Anna) that are less choreographed have a stronger impact. The choreography of the movements both add to and detract from the movie’s quality. I say this mostly because there are too many scenes where the extras in the background’s movements draw the attention away from the main characters. Many scenes are less effective because of the main characters’ movements. The audience is drawn more to the movements of the characters rather than the lines and since the dialogue in this movie is extremely thought-provoking, I don’t think that this is successful.

The other major criticism that I have for this movie is the structure. The movie seems to follow a linear path until Anna and Vronsky’s dance in Moscow. Afterwards, the film cuts to Anna on the train and Vronsky clearly following her. This serves to paint Vronsky in an almost stalkerish light and doesn’t really explain how Anna and Vronsky grew to love each other. The story is recounted to the story in flashbacks that weave throughout the main storyline. This would be fine except for the editing. If Joe Wright (the director) had chosen to alter the color scheme of the flashbacks to make it clear to the audience that they were indeed watching something that happened in the past, it would have made the movie less confusing. Despite the fact that the movie is based on a world famous book, it doesn’t mean that everyone knows this story and with a garbled structure, the movie is extremely hard to follow. That also being said, I believe there is a VERY prominent train motif within the movie that is practically thrown in the audience’s face. Everytime something significant happens, the screen cuts to an image of train wheels. The amount of foreshadowing in this movie makes it really hard to connect with Anna’s character and doesn’t really leave much room for an explanation of how Anna made her choice. The filmography in this movie serves to take away from the overall effectiveness of the screenplay.

I mentioned that this film had an all-star cast and that remains true. Kiera Knightly plays Anna the way that Tolstoy wrote her, making her a clearly likable character who descends into depression as a result of her own choices. While it’s not clear whether the screenplay wrote her like that or Knightly truly understood the nuances of her character, she acted very well. Jude Law made a strong Karenin, effectively portraying the caring husband and the strong statesman with equal believability. I would say that the weak link in this film was Aaron Taylor-Johnson. I think that he played Vronsky well, but really only shined when in conjunction with Knightly. I do want to give Taylor-Johnson the benefit of the doubt and say that he acted that way on purpose to further an idea that Anna brightened Vronsky’s life. Ruth Wilson and Matthew MacFadyen took on their roles with equal fervor and did their best with their scripts.

Overall, I think that this is an adaptation that is meant for people that are extremely familiar with the story. The confusing narrative structure and seemingly random screen cuts only serve to further themes that are explicitly present within the novel. If you are familiar with the story, the film is beautifully decorated with a couple colorful and impactful shots. The actors embody the characters that they play and the script does attempt to further the commentary in Tolstoy’s original work. This is probably not the best adaptation but it is certainly a strong one.