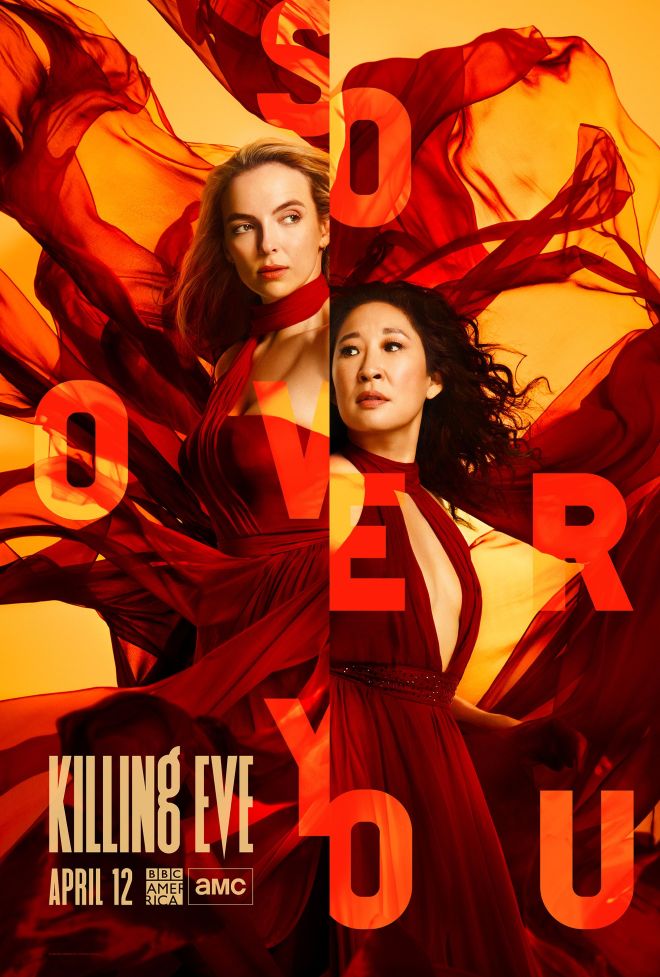 Killing Eve follows Eve Polastri, an MI6 officer who is tasked with finding and arresting Villanelle, a hired assassin who targets several high profile government figures. While Eve and Villanelle engage in a game of cat and mouse that is made only more intense by their fierce desire to dominate the other. Villanelle is obsessed with forcing Eve to realize her potential as a murderer while Eve wants to try and force Villanelle to harness her abilities for good. Eve’s obsession with controlling Villanelle causes her to spiral, causing her humanity to slowly fade. Villanelle’s obsession with Eve causes her to become sloppy with her work. Each woman has something to gain and everything to lose in one of the funniest dramas on TV.

The thing that I want to emphasize about Killing Eve is that it’s not necessarily a drama or a comedy. Sandra Oh and Jodie Comer are both hilarious in their own right but know how to switch gears without making it feel forced. They also have insane chemistry. I almost could believe that they had known each other for years before making this show. Sandra Oh has been a prominent name in Hollywood but I always felt that she had been typecast. This show does a brilliant job of showcasing Oh’s talents while allowing her to break out of her comfort zone. Jodie Comer is a relative newcomer (I’d seen her in The White Princess and she was brilliant) and definitely rose to prominence because of this show. I want to say that Comer’s facial expressions steal the show. She can easily move from false earnesty to a persona that many people associate with being psychopathic. I absolutely adore her.

The show stood out to me as being incredible mostly because the show doesn’t really drag. Each scene showcases something that furthers the characters’ development or furthers the plot. I found that I was pretty engaged throughout the entire thing and didn’t feel like the story was moving so slowly that I wanted to look up the outcome of a certain storyline or the fate of a beloved character. I liked that the story also made no qualms about reminding its audience that Villanelle is a murdering psychopath. The show borders on providing a compelling couple in Eve and Villanelle and also reminding its audience that Villanelle is a psychopath and that she is trying to manipulate Eve.

Killing Eve is a beautiful show. I don’t mean from the point of view of a beautifully developed plot or a fantastic cast, but rather that it is beautifully shot. Villanelle spends most of her money on luxurious clothing items making her surroundings beautiful. Villanelle’s costumes are perfectly put together making her seem even more deadly for how nothing ever seems to phase her. Villanelle’s apartment is beautifully decorated, also emphasizing her desire for luxury. By contrast, Eve’s house is homely but not luxurious. She lives her life for the thrill of an adventure, not so much caring how she looks. Villanelle manipulates Eve mostly through showering her with gifts and forcing her to look at herself differently. The reason that this adds to the beauty of this show is that this causes Villanelle and Eve’s separate characters to meld together. It creates an overlap that visually brightens the show. Aside from the costume designs, the show spans several European cities. The transitions are large block letters that fill the entire screen as though the show’s creators want that jarring realization that neither character is on their own playing field. Location is such an important aspect in this show and the camera work makes the show stand out. The different settings also contribute to the fast paced nature of the show. While it seems like there is an eternity before Villanelle and Eve actually meet face to face (knowing who the other is), the backdrops create a sense of excitement that builds up tension. For Eve, each new backdrop is a step closer to her catching Villanelle. For Villanelle, each backdrop is an attempt to get Eve’s attention.

The last thing that I want to talk about with this show is that Eve and Villanelle have just as much tension when they don’t share the screen. This is a concept that I learned about from a Youtube Channel called The Take (I’ll link the video here). While the video was focused on Al Pacino and Robert DeNiro, I found that it aptly applies here. Sandra Oh and Jodie Comer don’t need to occupy the screen all the time for their tension to be palpable. The build up to their eventual on screen meeting contributes to the feeling that one if always chasing the other. This is probably the most brilliant aspect of the show.

Overall, this show is very conflicting for me. I’m sad that I didn’t find it earlier but now that I have, I wish that the entire show had aired before I started watching it. It’s extremely captivating with compelling performances, diverse scripts (all the screenwriters are female and change every season), and thrilling shots. This show is one that’ll have you yelling at the screen and vacillating between supporting and condemning the central couple on the show.