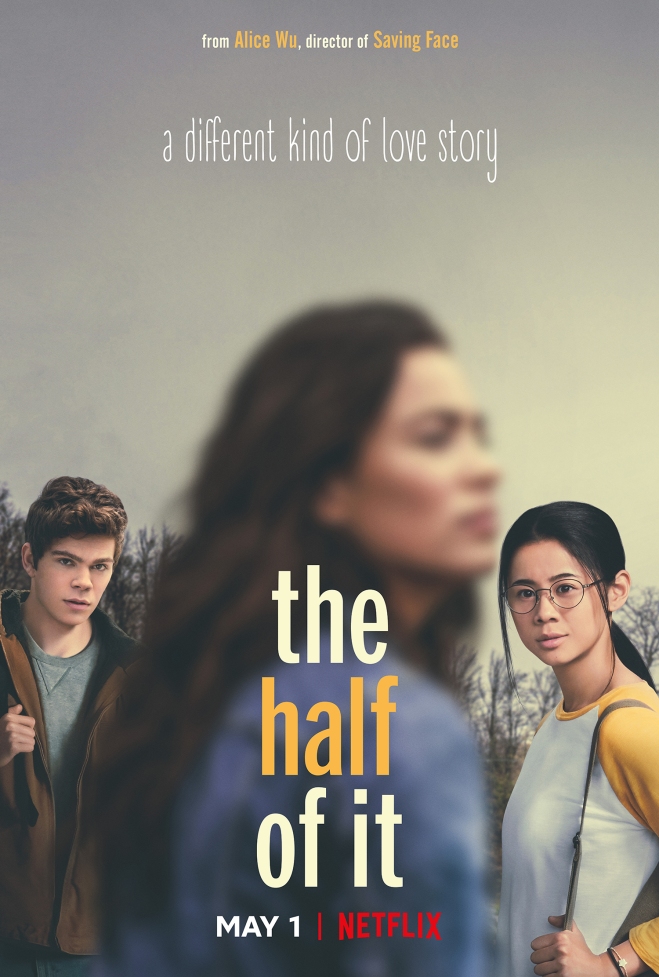 The Half of It

Love is messy. And horrible and selfish and bold. It’s not finding your perfect half. It’s the trying and failing. Love is being willing to ruin your good painting for the chance at a great one.

Leah Lewis, The Half of It

The Half of It is a coming of age movie about Ellie Chu, a Chinese-American girl who started a essay-writing business for her fellow high schoolers. When Paul, a football player with a crush, asks Ellie to help her write a love letter to a girl named Aster, Ellie finds that she is caught up in a written romance with Aster who thinks that she’s writing to Paul. As Ellie’s feelings grow, she struggles to come to terms with her own identity, sexuality, and budding friendship with Paul.

This movie was recommended to me by a very close friend and I can honestly say that I understand why she recommended it. This is the kind of movie that makes you reflect on the importance of representation. While I’m the first to argue that any movie can be universal, that mantra serves to lessen the sting of never seeing your story on the big screen. Growing up as an Indian girl, I relished movies like Bend it Like Beckham, Blinded by the Light, and The Namesake because they told stories of my own experiences without appropriating my culture. They also beautifully depicted the struggle between being true to your heritage and being true to yourself. For the  Asian, LGBTQ+ community, this is their story and this movie’s importance can’t be stressed enough because it serves to tell another community’s story.

This bulk of this movie is made up of the importance of words. Ellie starts off as an essay writer and her English teacher serves to further Ellie’s love of words by refusing to turn her in under the guise that she prefers to read an intelligent paper. Ellie is also a musician and throughout the movie, we see her writing lyrics to her songs. Then, Ellie finds that she is only able to communicate with Aster through words and under the guise of being Paul. This emphasizes the idea that Ellie’s personality is tied up in her words and when she’s not writing, she’s not really sure of her own identity. Aster helps her come to terms with who she is and Ellie’s letters to Aster help her grow into her voice, which is emphasized at the climax of the movie.

This movie also brings forward the theme of unexpected friendships. Ellie and Paul are polar opposites. For Ellie, the act of helping Paul date the girl that she is in love with brings them together because it serves as something they have in common. After that, they seem to enjoy each other’s company until they’re practically inseparable. This movie also had me thinking about the idea that minorities are very rarely a main character and even when they are, they always have a white sidekick that doesn’t really get to know the main character’s culture. What I love about The Half of It is that it doesn’t shy away from Ellie’s culture. Paul tries to get to know Ellie’s dad and her heritage and Ellie, in turn, does the same. Each of these characters have their own hopes and dreams and neither of them really feel like a sidekick. They seem to be on equal footing, bringing forward the idea that shared experiences can build a strong friendship.

In terms of determining her sexuality, Ellie’s letters function as an indicator of what she needs in a relationship. Conversation seems to be the most important thing to her and Aster, which is why she spends a large chunk of the film helping Paul learn to talk to Aster. This also serves to further the “finding your own voice” theme but also serves to help Ellie realize who she loves. I also like the idea that this movie emphasizes the homophobia in the church and that it’s possible to overcome that. The characters all attend a parochial (I’m assuming because we get to see them at church) school and when Paul learns of Ellie’s sexuality, he doesn’t react well, but eventually changes his tune. This is important because while it shows a side of Paul that is initially gut wrenchingly cruel, it also shows that a true friendship helps people overlook instilled prejudices.

As this is a coming-of-age movie, there is always the underlying factor of college. Ellie is set on remaining near her father (which I interpreted as a nod towards Chinese culture where the children help take care of their parents at a certain age) but has the potential to go far. The ending of the movie celebrates both Ellie embracing her identity without alienating her family. As a final thought, I loved how this movie touched on the struggles of being an immigrant in America subtly by including derogatory terms that were historically thrown in the faces of Chinese people in everyday conversation so that it almost seems normal until the view reflects on this and realizes that there is something wrong with this.

Overall, I think that this movie is a solid movie that provides a story for an underrepresented community. The characters feel like real people and the plot line is entertaining but emotional without being sappy. Plus, the cinematography is just stunning. It’s the perfect blend of everything that makes a coming-of-age story watchable and should definitely be placed on the top shelf next to The Perks of Being a Wallflower.