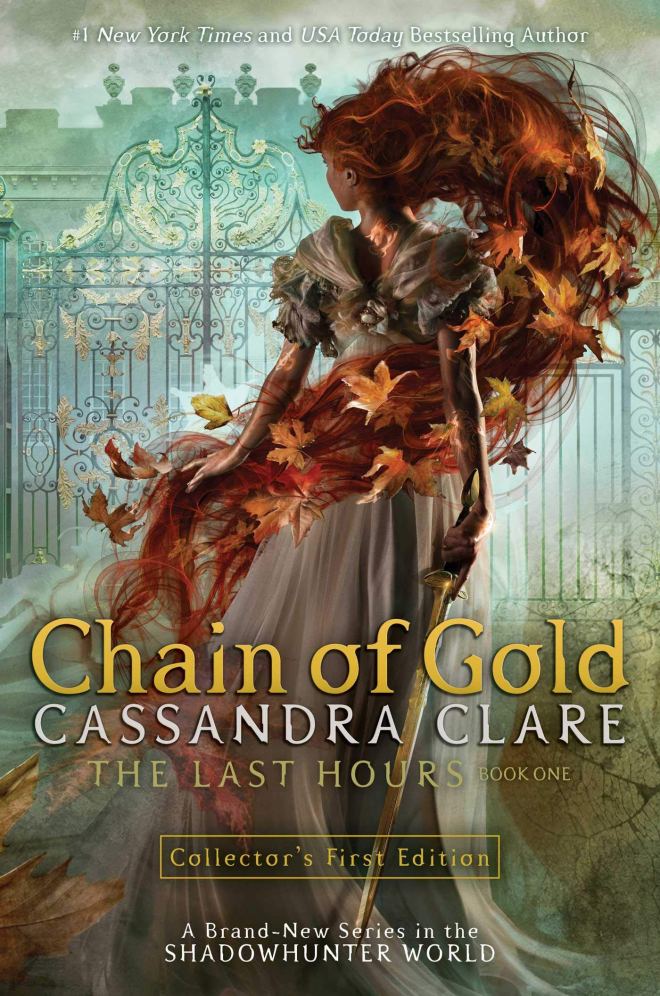 “Sometimes you have to stand back and let people do what they are good at, even if it seems like madness at the time.”

Summary: For years there has been peace in the Shadowhunter world. James and Lucie Herondale, children of the famous Will and Tessa, have grown up in an idyll with their loving friends and family, listening to stories of good defeating evil and love conquering all. But everything changes when the Blackthorn and Carstairs families come to London…and so does a remorseless and inescapable plague. James Herondale longs for a great love, and thinks he has found it in the beautiful, mysterious Grace Blackthorn. Cordelia Carstairs is desperate to become a hero, save her family from ruin, and keep her secret love for James hidden. When disaster strikes the Shadowhunters, James, Cordelia and their friends are plunged into a wild adventure which will reveal dark and incredible powers, and the true cruel price of being a hero…and falling in love.

Like F. Scott Fitzgerald, Cassandra Clare’s novels played a large part in developing my love for literature. Her imagination and character development are something that I have consistently admired over the years and I am guilty of religiously buying the print and electronic versions of her books. It absolutely pains me to give this book anything less than 10/10, but if I am being fair, this novel didn’t feel up to its usual standard to me.

I’ll start with the biggest problem I noticed with this and work my way up. Cassandra Clare’s novels are notoriously famous for not having an order. What I mean by that is that a reader can pick up any of her trilogies and learn about the world she has created due to her elaborate descriptions. For a dedicated reader, these parts could become tedious but for anyone new, they were a necessity and that’s why I preferred to have these incorporations. This was lacking in Chain Of Gold. Why is this important? I have read each of Cassandra Clare’s novels so when reading this, I understood most of the easter eggs that she incorporated. To the novice Clare reader, this book is a slew of confusing statements, unfamiliar characters that the reader is expected to know, and references to events that happened in books prior. Now, this is all okay if this series is meant to be a continuation of The Infernal Devices, Ghosts of the Shadow Market, or The Bane Chronicles. However, Clare herself has said many times that this series can be read independently of the others. So, why does it feel like Clare has incorporated too many easter eggs?

To me, this story felt like a shrine of her other stories. I don’t fault Clare for continuing to write about this elaborate world that she has created because it’s clear to any reader how much effort she has put into creating this. But when continuing to write about characters from the same family, it’s important to write about them as separate people, not as an extension of an ancestor. For example, James Herondale is Will Herondale’s son. James Herondale read like Will but in a younger generation. I couldn’t really see what made him different from his father in terms of a hero. Maybe this is on purpose and to appeal to her readers who love Will (myself included), but I’m unsure if I thought this was successful in the way she needed it to be. The one thing I can say was that James seemed to come into some traits at a younger age than his father. Also, in sticking with Herondale’s, I really like Lucie and would’ve loved to see more of her. Lucie herself says that she feels like the “lesser” Herondale and I don’t think Clare does much to overshadow it.

Moving on from what I didn’t like, I love Clare’s prose. She has a way of evoking senses for the readers in a way that not many authors can. It’s very easy to lose yourself in her writing and feel like you are actually standing with the Merry Thieves in their room above the Devil’s Tavern. With a prose like this, I think she is one of the strongest YA authors in this generation. I also love Clare’s consistency with her plotlines and with her characters. What I mean by this is that we don’t find characters acting drastically different from their original introduction unless something is wrong or they have undergone a paradigm shift. Her plotlines make sense, I don’t find myself wondering when we were given a piece of information or when an event happened because we are always privy to more information than the characters.

Clare also has a history of writing strong women and CoG is no exception. Cordelia might be one of my favorite characters that she has written to date for the fact that she is the kind of woman that inserts herself into situations and ends up the hero. I also adore her seemingly unrequited love for James. This brings me to Clare’s history with love stories. While most of her works don’t rely heavily on love to drive the plot forward, she does have her fair share of love triangles and does tend to leave behind a trail of broken hearts (mostly her reader’s). What struck me about COG was how subtle the love was and that it was not always romantic. Love comes in many different forms, something that Clare has often brought forward through her parabatai bonds and her elaborate family . Here, only four characters had a parabatai, so the platonic love that she described wasn’t magic. In this story, love was a driving force, but not a main focus, which I appreciated because the primary plot line was so complex. She did include cute moments which made me smile, but it didn’t feel like too much. The common goal that her characters share is to save the world and often, warriors have to put aside their feelings or put others in danger and I think this book (and The Dark Artifices to some extent) emphasizes that sacrifice well.

As with all of Clare’s novels, there is a certain loss when the novel ends. It’s like you’re finally meeting your best friend only to have them move away before you guys get to experience the world together. So, I wait until the return of these characters that I have gotten to know over 500 pages of battle, love, and betrayal so we can continue on like we were never apart.

TL;DR: While a little confusing for novice readers and filled with some tedious easter eggs, Clare’s novel holds her usual standard of gorgeous writing, lovable (and hateable) characters, and the Herondales’ irrational fear of ducks.